The heart and body of a woman always have its own balanced rhythms. There are four stages of a woman’s body due to changes in hormonal balance: ovarian period, ovulation, luteal period and menstrual period.

Female hormones include estrogen, follicle, progesterone & luteinizing. For every female body, the menstrual cycle is different (ranging from 20-40 days). And if you record your basal body temperature, you can grasp the cycle and rhythm of your own female hormones. 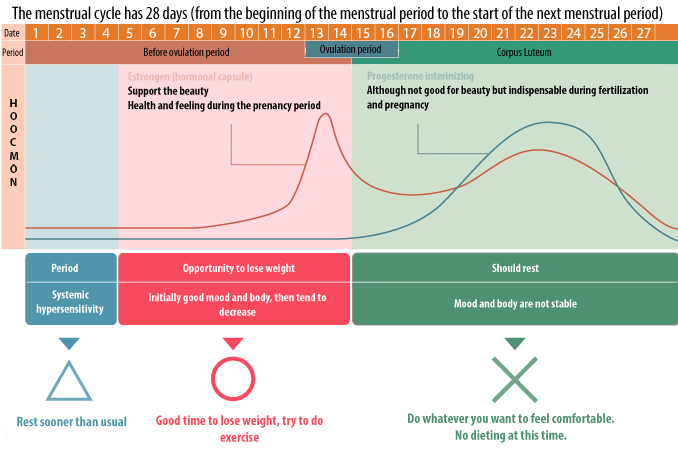 What is the right time for a diet?

The period of menstruation ends, the initial feeling in the “follicular phase” is that the mood gradually becomes stable, the body feels light. Besides, you feel the moisture of your skin and hair, this is a sign of increased female estrogen hormones.

Estrogen plays a role in arranging the mind and body to promote ovulation and preparation for pregnancy, and when this amount increases, it also plays the role of a “beauty hormone”, to moisturize skin and hair.
It is said that this is an abundance of female hormones, making women extremely attractive and attractive. Since estrogen secretion will continue until ovulation, this period is the ideal time, suitable for dieting. At this stage, you will be more excited, more excited, your body will become lighter and your emotions will become positive. So this is a great time to exercise and enhance your diet. So pay attention to your diet plan and make good use of this period.

● A few effective tips for you to lose weight more effectively

2. Eat 3 meals and limit snacks.
Spend “staple food” on the main meals and pay attention to the nutritional balance. In addition, increase your exercise to burn fat and especially control cravings. Imagine a slender, beautiful body for motivation.

The time is not suitable for diet

“The luteal phase” from ovulation to the next menstrual cycle will be the time when you become both physically and mentally uncomfortable. This time you are easily agitated or easily depressed, easily tired. Accompanied by some symptoms such as cold hands and feet, lower abdominal pain. Although there is a short period of time that causes the body to become unstable, this is a stage such as to facilitate conception, stimulate hormonal changes in the follicle until the eggs mature and fall. At this stage, the female body releases estrogen and progesterone.

Because of this effect, it is difficult to control appetite. In this period, the body is more likely to absorb food and therefore body weight is also easy to increase. During this period, many people will get more dry skin, difficult to eat makeup and also affect a lot of female beauty. In the case of pregnancy, there is a tendency to increase protection for yourself, because the mind and body are not stable, it can be said that this period is not a pleasant period for women.

Going through a time when you feel stressed, irritable, depressed, so do something pleasant or do something for yourself and change your mood by taking a break. as much as possible. Excessive exercise and strict diet at this time are not appropriate, so be careful to avoid this stage. (You should practice it lightly during this period, sister.)

Does the serotonin deficiency make me crave for sweets?

Serotonin works on different neurotransmitters in the brain and has two main functions. One is “a role to stabilize the spirit” and the other is to create a feeling of fullness to prevent appetite. Low levels of serotonin in the body can lead to high appetite, and it is difficult to control your weight.

In other words, if a serotonin deficiency will lead to instability and we cannot suppress appetite, we will find sweets and eat too much. You go to sweets because it’s a way to make serotonin temporarily increase in your body, and help you feel calm. Therefore, this may also be a sign that you realize you are deficient in serotonin (suddenly craving for sweets).

Compared to men, women are less likely to have serotonin in the brain, so it is said that there is a tendency to become emotionally unstable or lack of eating too much in sweet things when a deficiency occurs. Moreover, it is said that not only does the amount of serotonin secretion in the brain decrease, but its transmission is hampered in poor health before menstruation, and this trend becomes more pronounced. If you go into a diet, even think, “I was disappointed”, rather than running to sweet and eating too much high quality, calories every time, try increasing the excretion of serotonin in execution or similar.

1. Mobilize the body
Exercise with stimulation with continuous rhythm is effective.
Specifically, vacuum cleaners and rags for walking and rhythmic floors are good. If you do not have time to exercise, gymnastics that you can sit down can also be effective. Turn your neck slowly, take a deep breath.

2. Absorption of “tryptophan”
It is also effective to eat essential amino acids tryptophan as a raw material to make serotonin.
It is also good to have “milk”, “cheese”, “banana”, “soybean”, “lean fish like tuna” etc. containing a lot of this.

3. Sleep well and absorb the sun
The amount of serotonin released increases with good sleep.
In addition, it is said that serotonin secretion, which tends to decrease due to irregular sleep, returns to normal after the body clock is reset by taking sunlight after waking up.

4. Change mood & relax
Fragrances like lavender, chamomile, marjoram have a relaxing effect and it is said to be good for secreting serotonin.
Change your mood with a good scent.

Why should women cherish the rhythm of the body?

As mentioned above, women have different symptoms due to hormonal effects.

Ignore the rhythm of this hormone and make the diet impossible, etc., on the other hand, “become too good”. Recent young women tend to be “silly” due to an unbalanced diet and diet. (About 24.2% of women are between 20 and 29 years of age / BMI under BMI 18.5 / Ministry of Health, Labor and Welfare Survey in 2011)

Therefore, the reduction of the function of the female hormone reduction in bone mass, the menstrual cycle disorders and delays, and being affected, such as stopping, you come out even if you are no longer working. according to the function of an important woman is pregnancy and childbirth. When dieting, it is important to keep the body fat percentage in the proper range in mind, keeping the body sugar healthy and feminine.

The body of a delicate woman. Knowing the rhythm of your body can be a reasonable diet. To know the rhythm of the body By registering a menstrual day, it is also encouraged to use Tanita’s body composition clock equipped with a female diet to teach the diet season opportunity. Create an effective diet without missing out on a diet opportunity!