The body changes over time

Normally, the human body will change from year to year. If you know the basics of this change and take measures to prevent aging, your body will greatly improve and reduce the signs of aging.

Does the body shape change over time?

Do not feel that your body is changing when you get older?

The fact that each body will change more or less over time, the older the body, the easier it will become. This can be interpreted based on a reduced amount of basic metabolites, so even if you keep the same exercise regime, the calorie consumption will be less. However, if you still keep the level and eating habits as before, the balance between digestibility and calorie consumption will be affected. Your body changes more or less based on age and gender. See the following trend of change given for a quick, timely improvement. 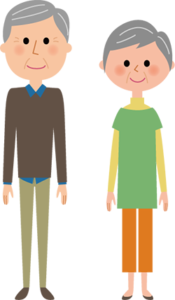 The older you are, the easier it is to gain weight

Analysis showed that the total energy consumption per day of metabolism tends to decrease with age.

The basic metabolic ability is the energy needed for each person’s body to maintain functional functions such as regulating heart rate, breathing, controlling body temperature. Even when you sleep, these energies are still consumed.

This basic metabolism is consumed continuously 24 hours a day and accounts for more than 70% of the total energy consumption of the whole day.

For the body with good metabolic ability, it will lead to the ability to easily lose weight and difficult to gain weight (by large energy consumption).

After the body grows, the aging process begins to take place slowly, the cycle of cell regeneration slows, the amount of muscle needs to consume more energy. 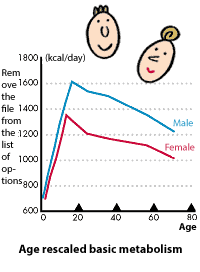 Will fat accumulate around the abdomen according to the aging process?

Please refer to the picture below to get details.

This is a graph that shows “What percentage of body fat accounts for when total body fat is 100” by the age of 35 to 80. Fat distribution can be easily seen (including fat). organs) of both men and women increased rapidly with age. 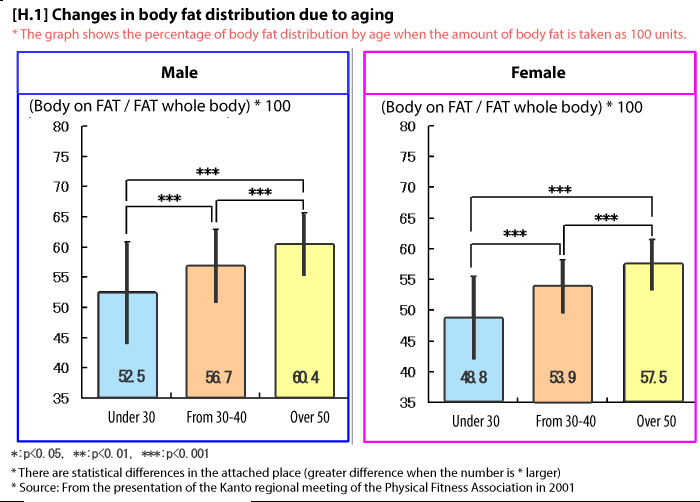 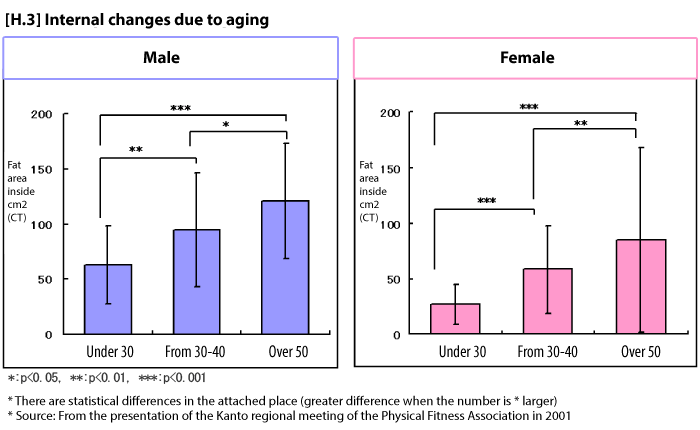 Besides, when belly fat and visceral fat increase, blood fat and blood pressure tend to be higher and the level of metabolism increases accordingly. There are statistics showing that this will have a significant effect on liver function. People 30 years of age or older also need to be cautious even if the body fat percentage of the entire body is not high. Therefore, reducing abdominal fat is not only for improving appearance but also for health. 1) 2)

The level of aging in men and women is different

The common point in the aging process in both men and women is that the amount of fat in the abdomen is increasing, and the metabolic ability is also affected. However, in terms of physique changes, the changes in body composition, as well as the amount of fat distributed in the body of the eyebrow and women, have many differences.

Initially, the amount of muscle in men is larger than that of women, although the fat percentage is lower. In men, muscle mass will gradually decrease with aging of the body. Especially the trend is clearly shown in the arms and legs. According to statistics, when men enter the age of aging, muscle mass in arms and legs will decrease.

For this reason, over time, men’s muscle mass gradually decreases due to aging, so even if their weight is not too much, the fat ratio (body fat ratio) often increases.

For women: The amount of fat on the upper body tends to increase

Women are more affected by visceral fat than muscle mass and tend to change significantly more than men.

In other words, for young girls, fat tends to allocate in the upper body like arms and abdomen. When you are over 50 years old, the amount of fat will be evenly distributed over the woman’s body and make her body become fatter.

What is a youthful body?

If you wonder “Which shape helps you look younger?”, You can find the answer by comparing the physique of today’s young generations.

◎ Male: Although the body fat percentage is low, the body mass is large and thick, especially in the arms and legs, the belly is slim and low in fat.

If shown by the image, you can refer to figure 5. Young people tend to be “more rounded”, and can also see muscle mass, as well as the distribution of fat between men and women, have huge differences. 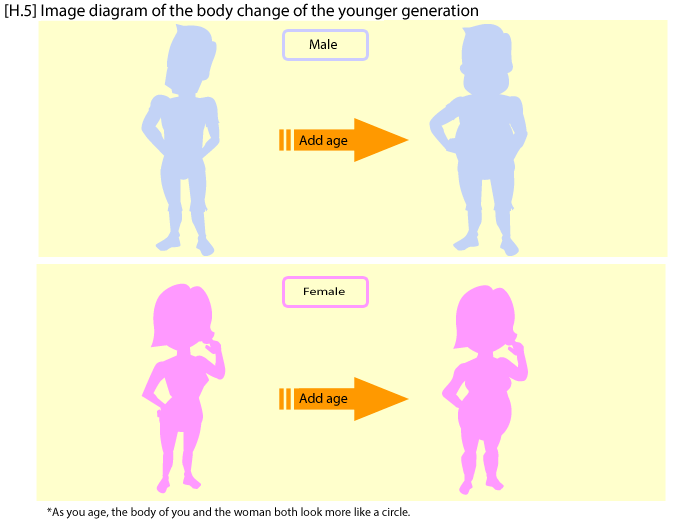 Ways to maintain fat consumption regardless of age

So how can we maintain body weight, body fat, muscle mass as young as possible without reducing the age-related metabolic rate? If you are aware of the underlying metabolic rate decreasing year by year and taking action to reduce energy (calories), you can prevent excess energy, but be cautious.

If we only “reduce our diet” without paying attention to nutritional balance, the amount of protein that produces muscle and the amount of vitamins & minerals that promote the basic metabolism also decreases. Therefore, it is necessary to reduce the amount of food reasonably so as not to fall into a vicious cycle that is harmful to health.

To do this, you need to “add more vitamins and minerals even though they have low-calorie levels, but will contribute to muscle production and promote basic metabolic rate.”
Specifically, refer to the following mentioned contents. To capture the basic metabolism, it is recommended to measure it with a body composition analyzer. This helps you understand “how easy your body is to consume”, the amount of body fat that is maintained “in the” basic metabolic assessment “.

However, it should be noted that the body weight decreases, so the basic metabolic rate should be maintained, but now also reduced, so we cannot see the changes in the exchange rate. basic substance.

Try exercising/implementing the diet according to the instructions.