What is balanced meal plan？

To make a contribution to creating a healthy body, it is important to have a diet that must have a balanced diet. Find out how to balance nutrition and how to make those nutrients maximize your role.

A balanced balanced diet will be full of basic grains such as “main” rice, meat, fish, eggs, protein entities such as soybeans … in the main meals. Should combine with a variety of vegetables, mushrooms, seaweed. You can transfer “Japanese-style meals” with “side dishes” and “soups”. And if you take into account the amount needed during the day and don’t consume too many calories, this may be the perfect menu for you. 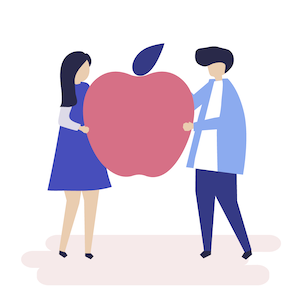 Try to arrange your dining table with the following 3 colors to achieve the ideal balance:
· “Yellow” of sugar is found in essential glucose-containing foods such as rice, bread and noodles
· “Red” of proteins found in foods like meat, fish, eggs, soybeans etc.
· Remember “green” from side dishes such as vegetables, mushrooms, seaweed.

The role of 3 food groups

● Yellow group
The so-called “carbohydrate” belongs to the yellow group contained in grains such as rice and bread that are absorbed by the body and become blood sugar. This sugar is easy to produce into energy and acts as a fast-acting source of energy to the body and brain. However, if not converted into energy, it will be converted into fat by a hormone called insulin, and stored in the body. Although this food group produces energy that is metabolized immediately after a meal, the amount of carbohydrate produced by this food group is also capable of being converted into fat, so it is important to avoid overloading of these food groups. To prevent too many calories from being absorbed, you need to adjust the cooking method and the main food group of the yellow food group to be reasonable.

● Red group
Fish, meat, eggs, dairy products and beans of the red group are rich in “protein”. This protein is digested and absorbed, then subdivided into “amino acids”, but there are many different types, so also the physiological and physiological effects of amino acids are therefore not the same. Amino acids contribute to the formation of components such as muscles, internal organs, hair, nails, etc. They also produce hormones, enzymes and immune cells. Amino acids are also a basic component of somatic cells, DNA of genetic information is also made from amino acids. Amino acids have two main types: one can be synthesized from other parts of the body, the other – the special amino acid “essential amino acid” that must be synthesized by external foods. For this reason, if your body does not have enough protein that contains a variety of amino acids, your body will be weakened by resistance, susceptible to infection, or hormonal imbalance such as irregular menstruation, muscle loss. weakness, moisture in hair and nails, endocrine disorders … etc.

● Green group
For those who want to diet, this is an important food group. Because many foods in this group are rich in vitamins and minerals, low calorie, so if you take advantage of this food group, you will have a long feeling of fullness, but your body does not have to load too many calories without a set.

Lipid – one of the three main sources of nutrition

It can be said that “lipid” is one of the three main nutrients. Lipids can be synthesized from fatty meat, fried foods, butter, blue fish, dairy products, nuts and avocados. Lipids, not only play the role of an energy reserve but also a component of cell membranes, organs, nerves, etc., and help transport vitamins.
In addition, recent studies have also shown that lipids have functions to secrete and regulate various hormones. Some types of lipids help you have beautiful skin and strong hair. In particular, some fatty lipids such as “omega-3” are found in blue fish; walnut oil; Lanse seed oil; perilla oil; Olive oil brings a lot of beauty effects. It also helps to lower cholesterol and improve blood pressure. Take special care and add quality lipids, such as fish and nuts, to get an important source of nutrients for a healthy, beautiful body!